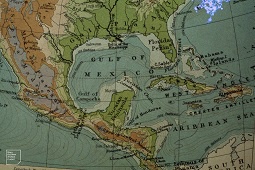 The 7th grade poetry unit gives an in depth approach to poetry ...

The 7th grade poetry unit gives an in depth approach to poetry involving the four strands within the core. I've included worksheets, rubrics, and answers keys where applicable. I have also used literature examples from the core.

These images from the Smithsonian Institution depict Nancy Knowlton's work with snapping ...

These images from the Smithsonian Institution depict Nancy Knowlton's work with snapping shrimp in Panama. Knowlton found that the closing of the isthmus -- dividing the Pacific Ocean from the Caribbean -- resulted in new species of shrimp.

The visual narratives and abstractions of this preeminent African American artist explore ...

The visual narratives and abstractions of this preeminent African American artist explore the places where he lived and worked: the rural South, Pittsburgh, Harlem, and the Caribbean. Bearden's central themes: religion, jazz and blues, history, literature, and the realities of black life he endured throughout his remarkable career in watercolors, oils, and especially collages and photomontages from the 1940s through the 1980s.

Several professors, government officials and political party members spoke in a forum on political and social issues affecting U.S. territories, which focused mainly on the relationship between the U.S. federal government and the governments of the territories. Following the speakers' prepared remarks, the panelists responded to questions from members of the audience.

More than 2,000 years ago there was likely a thriving Taino community ...

More than 2,000 years ago there was likely a thriving Taino community in the heart of Charlotte Amalie. In 2013 contractors began turning up shards of pottery and other artifacts during otherwise routine roadwork on Main Street near Market Square. Work was temporarily halted and archeologists were called in to help dig up what was described as a “major” find. Thousands of artifacts were eventually discovered in a relatively small area. A short documentary was later produced about the dig and the many interesting objects found on site. - - US Virgin Islands DPNR and the State Office of Historic Preservation

This lesson provides a Common Core application for high school students for ...

This lesson provides a Common Core application for high school students for Chinua Achebe's novel Things Fall Apart. Students will undertake close reading of passages in Things Fall Apart to evaluate the impact of Achebe's literary techniques, the cultural significance of the work, and how this international text serves as a lens to discover the experiences of others.

This article examines the relationship between custody, access, and provenance through a ...

This article examines the relationship between custody, access, and provenance through a case study of the records of a former Danish colony, the United States Virgin Islands. In 1917, when the United States purchased the Virgin Islands from Denmark, Danish archivists removed the majority of records created there during colonial rule and deposited them in the Danish National Archives. Following its establishment in the 1930s, the National Archives of the United States sent an archivist to the Virgin Islands to claim most of the remaining records and ship them to Washington. The native population of the Virgin Islands, primarily former colonials whose ancestors were brought from Africa as slaves, were left without access to the written sources that comprised their history. While all three parties have claims to custody of the records, the claim of the people of the Virgin Islands relies on an expanded definition of provenance that includes territoriality or locale, as well as on a custodial responsiblity for access. The competing custodial claims suggest a dissonance between legal custody, physical custody, and archival principles that may be resolvable through post- custodial management practices.

When Columbus arrived in the Caribbean, he met the Taino people. In ...

When Columbus arrived in the Caribbean, he met the Taino people. In this video, Kim explores the consequences of Columbus's voyage for the Taino people, as well as the changes wrought in Europe by Spain's New World exploits.

Read the Fine Print
Some Rights Reserved
An Exploration of Romanticism Through Art and Poetry
Rating
0.0 stars

Students use art and poetry to explore and understand major characteristics of ...

Students use art and poetry to explore and understand major characteristics of the Romantic period.

In this 8 eight-week module, students explore the experiences of people of ...

In this 8 eight-week module, students explore the experiences of people of Southern Sudan during and after the Second Sudanese Civil War. They build proficiency in using textual evidence to support ideas in their writing, both in shorter responses and in an extended essay. In Unit 1, students begin the novel A Long Walk to Water (720L) by Linda Sue Park. Students will read closely to practice citing evidence and drawing inferences from this compelling text as they begin to analyze and contrast the points of view of the two central characters, Salva and Nya. They also will read informational text to gather evidence on the perspectives of the Dinka and Nuer tribes of Southern Sudan. In Unit 2, students will read the remainder of the novel, focusing on the commonalities between Salva and Nya in relation to the novel’s theme: how individuals survive in challenging environments. (The main characters’ journeys are fraught with challenges imposed by the environment, including the lack of safe drinking water, threats posed by animals, and the constant scarcity of food. They are also challenged by political and social environments.). As in Unit 1, students will read this literature closely alongside complex informational texts (focusing on background on Sudan and factual accounts of the experiences of refugees from the Second Sudanese Civil War). Unit 2 culminates with a literary analysis essay about the theme of survival. Unit 3 brings students back to a deep exploration of character and point of view: students will combine their research about Sudan with specific quotes from A Long Walk to Water as they craft a two-voice poem, comparing and contrasting the points of view of the two main characters, Salva and Nya,. The two-voice poem gives students an opportunity to use both their analysis of the characters and theme in the novel and their research about the experiences of the people of Southern Sudan during the Second Sudanese Civil War.

This collection of resources looks at Caribbean writers.

International Day for Monuments discussion with Former Senator Myron Jackson about the ...

International Day for Monuments discussion with Former Senator Myron Jackson about the bust of King Christian the IX being removed from the Emancipation Gardens public space as a result of public outcry.

The measure appropriates $20,000 from the St. Thomas Capital Improvement Fund to cover the cost of removing and replacing the sculpture. Additionally, the program promotes new discourses, alternative and nuanced approaches to established historical narratives, and promotes inclusive and diverse points of view.

From a team of Puerto Rican journalists, musicians, and artists, "La Brega" ...

From a team of Puerto Rican journalists, musicians, and artists, "La Brega" is a 7-part podcast series that opens doors to the Puerto Rican experience.

From a team of Puerto Rican journalists, musicians and artists, "La Brega" ...

From a team of Puerto Rican journalists, musicians and artists, "La Brega" is a 7-part podcast series that opens doors to the Puerto Rican experience, co-pro...

WNYC Studios and Futuro Studios present “La Brega: Stories of the Puerto Rican Experience”: a seven-part podcast series that uses narrative storytelling and investigative journalism to reflect and reveal how la Brega has defined so many aspects of life in Puerto Rico. Available in English and Spanish.

Welcome to Music 1300, Music: Its Language History, and Culture. The course ...

Welcome to Music 1300, Music: Its Language History, and Culture. The course has a number of interrelated objectives:
1. To introduce you to works representative of a variety of music traditions.These include the repertoires of Western Europe from the Middle Agesthrough the present; of the United States, including art music, jazz, folk, rock, musical theater; and from at least two non-Western world areas (Africa, Asia, Latin America, the Caribbean, the Middle East, Indian subcontinent).
2. To enable you to speak and write about the features of the music you study,employing vocabulary and concepts of melody, rhythm, harmony, texture, timbre,and form used by musicians.
3. To explore with you the historic, social, and cultural contexts and the role of class, ethnicity, and gender in the creation and performance of music,including practices of improvisation and the implications of oral andnotated transmission.
4. To acquaint you with the sources of musical sounds—instruments and voices fromdifferent cultures, found sounds, electronically generated sounds; basic principlesthat determine pitch and timbre.
5. To examine the influence of technology, mass media, globalization, and transnationalcurrents on the music of today.
The chapters in this reader contain definitions and explanations of musical terms and concepts,short essays on subjects related to music as a creative performing art, biographical sketchesof major figures in music, and historical and cultural background information on music fromdifferent periods and places.

Only Sharing Permitted
CC BY-ND
Race in the Colonial Past and Present: Virtual Conversation with La Vaughn Belle and Jeanette Ehlers
Rating
0.0 stars

ASF presented a virtual conversation between artists Jeanette Ehlers and La Vaughn Belle on “Race in the Colonial Past and Present,” moderated by Ursula Lindqvist, exploring the history of Denmark's colonial presence in the mid-17th century and how it has since affected representation.
In 2018, Virgin Islands artist La Vaughn Belle and Danish artist Jeannette Ehlers created the monumental public sculpture entitled I AM QUEEN MARY, the first collaborative sculpture to memorialize Denmark’s colonial impact in the Caribbean and those who fought against it. In this program, listen to the two artists discuss colonialism and how commemorative representations can impact the public discourse surrounding Danish colonial history. What do these representations mean for people of African descent living in the Nordic Countries? What do they mean to the Virgin Islands? And how can they intervene in the historic, current and future relationship between Denmark and the Virgin Islands?

Unrestricted Use
Public Domain
The Resistance and Ingenuity of the Cooks Who Lived in Slavery
Rating
0.0 stars

Archaeologists are investigating foodways and re-creating meals prepared by enslaved people who ...

Archaeologists are investigating foodways and re-creating meals prepared by enslaved people who lived in North America and the Caribbean to better understand their everyday lives and fill gaps in the historical record.